Due to the relatively low functionality and performance of this type of VCR, it can only be used as a simple range of recording computer games. The disadvantages are as follows:

1, is not compatible with HDCP protocol, can not record all types of encrypted video.

2. The recording video format is MP4 format. In case of sudden power failure, the recorded file will be automatically lost.

3, does not support scheduled recording, only supports one-button recording and one-button stop.

4, hard disk format or NTFS or FAT32 format. If it is adjusted to NTFS format, the video cannot be segmented automatically and will be recorded continuously. The file will be infinitely large. Inconvenient to play and edit, someone must press the stop button. If it is adjusted to FAT32 format, it is automatically segmented every 15 minutes of recording, the file size is relatively small, and the recorded files are numerous.

5, can not watch while watching, you must stop recording before you can look back.

6, can not be built-in hard disk video, support the insertion of SD card or TF card use, although the support of large-capacity hard disk, but the stability is not ideal.

Such video recorders are modified and adapted on the basis of analog capture cards. They do not even meet the technical level of a new generation of mobile phones. They have few functions and poor performance, and it is difficult to meet the actual requirements of conventional home video recording. Such representative products on the market are those models that are being sold on Taobao by people in Taiwan and other places. These products have been exaggerated on publicity and must be purchased carefully.

The HDT series remote video conference recorder is characterized by not only having all the functions of the home HD recorder, but also adopting the four-generation CYKL chip system for the video conference requirements, and adding an automatic boot record, CNCY enhanced multi-group audio mixing module, and C+. CY04 audio and video processing system. Support HDMI audio and video input at the same time, embedded in the left and right channels, 3.5MM analog audio, microphone audio, DVIVGA audio input at the same time, perfect audio and video real-time synchronous recording without delay. Especially for different types of video conferencing terminals, there are multiple video recorder models with multiple terminals such as HDMI, VGA, DVI, SDI, component, and AV. In order to meet the different needs of the unit purchase, HDT series video conferencing recorders have three levels of high school, low school, the price is between 3000-8000 yuan, with a flexible and wide choice of space. HDT series teleconferencing video recorders have fully entered the CY 4th generation and become the leading domestic and foreign product!

Fourth, the local conference to monitor high-definition video recorder with <br> <br> be listed 1080P60hz HD cameras, as some court hearing, banking supervision, conference room video powerhouse of military units and organizations, teaching and training, it is important group gatherings, theatrical For performances and other occasions, high-definition video and data storage for local videos has become a trend. The traditional local analog video recorder is far from meeting the requirements of this HD video recording. To this end, Chun Yuen Technology has launched the WHD series of support for 1080P60hz high-definition camera connections, can support up to 16 HDMI, DVI, VGA, SDI and other special port input multi-terminal local conference HD video recorder.

At present, there are 24 models of WHD video recorders that can be selected, and the client can flexibly select the model by inputting the number of video recording channels as required. The price is between 3,000 and 30,000 yuan.

Since the output interfaces of the endoscopic laparoscopic scanner produced at home and abroad are numerous, the input interfaces of the medical high-definition video recorder are correspondingly rich, and basically include common input interfaces such as HDMI, DVI, VGA, color difference, and S-video. The number of input resolution frames supported is also as high as 1080P60hz. The operation mode covers the panel keys, universal remote controller and foot controller. Fully synchronized instant no delay output, not only HD recording, but also a one-click high-definition map. At the same time, medical records are also embedded in the system settings. The shell shape has a small and exquisite microcomputer type and a large and large-scaled large-scale instrument type, which satisfies the purchase and use requirements of different units.

HDT medical HD video recorder architecture, are all CY four-generation machine architecture, and laid the technical foundation for the birth of five generations of machines. Domestic HDT medical video recorders are priced between 7,000 and 40,000 yuan, which greatly reduces the purchase cost of customers. Compared with imported machines, they have a higher price/performance ratio.

Looking at the brands and models of high-definition hard disk recorders that are currently available on special ports such as HDMI, the overall trend is still in the Chaoyang industry. Among them, the HDT and WHD series products introduced by Chunyuan Technology have developed over the past 10 years and have formed their own unique and mature CNCY systems, occupying most of the market share of the market, and have been in the lead for nearly 10 years. Although some units or Taobao shops have introduced some models from Europe, America and Taiwan, there is still a maturing process in terms of chip system, operation mode, product function, and performance.

We can provide thoes kinds of the DEUTZ BFM1015 engine spare parts:

High standards of quality, reliable production methods, the latest equipment and qualified, committed staff ensure that tried and tested DEUTZ quality components are produced at all our sites 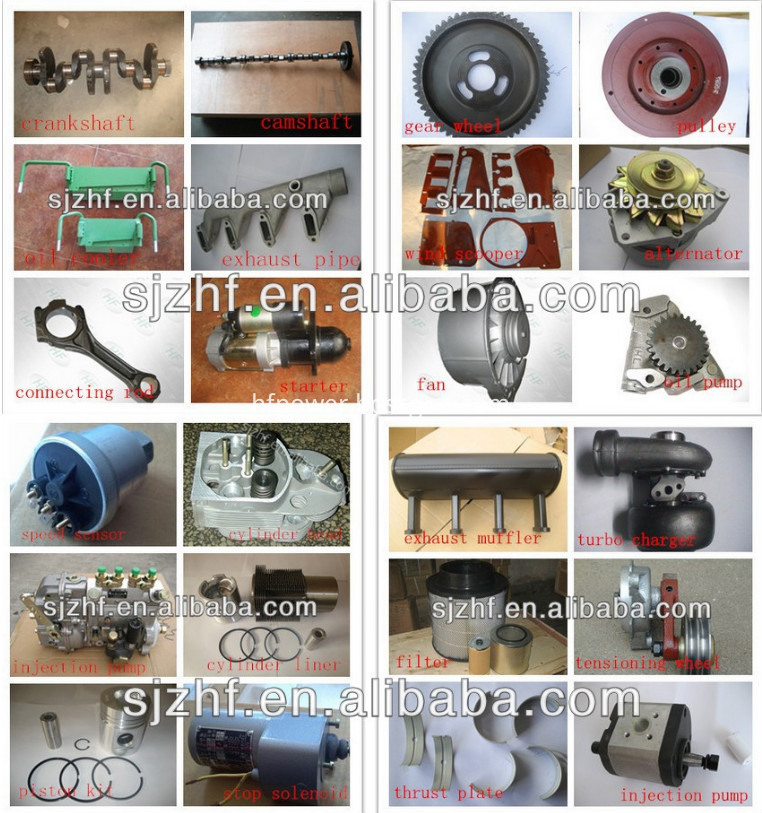